The Mobile Majority is On the Move 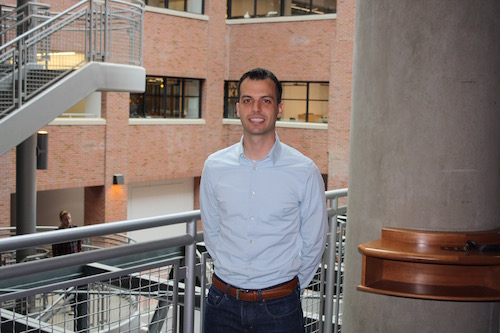 The company is scaling to meet client demand of their mobile creative and adtech services, bolstered by their proprietary technology platform. With roots in Columbus, they currently have about 25 job openings spread across all of their offices which also includes Santa Monica, San Francisco, New York City, Detroit, Chicago, Bogota, and São Paulo.

TechWeek Detroit took place in Ford Field this year, and included an increased corporate presence, which was something to be leveraged for later stage companies looking beyond startup mode like The Mobile Majority.

The company pivoted a few years ago from a gamification play to creative services and a proprietary platform.

Matthew Russo, Lead Educator at the company, presented at TechWeek Detroit on key topics effecting the current and future of the mobile marketing space. He was also joined by Evan Krauss, Chief Revenue Officer who also presented at the annual conference.

We sat down with Matthew Russo for a quick conversation about where the company’s been and where they are headed.

“Before transforming into The Mobile Majority, we were PaeDae, a startup specializing in reward-based advertising with two on-staff developers. We pivoted to a vertically integrated mobile platform and recently closed an 8 million dollar Series B.”

With a list of Fortune 1000 brands, sports teams and entertainment companies as clients, it would seem the decision to move away from the concept of PadDae; play games, win deals, was a good one. They now offer customizable ad units that fold in the gamification concept.

“People don’t want to do bad mobile ads. We focus on the KPI and audience and build out an awesome creative experience with our (in-house) studio.”

The ability for the company to offer a vertically integrated platform gives their clients, both brands and agencies, a one-stop shop for media, audience, creative and measurement. According to their website, “The Mobile Majority is the only company with access to data from both mobile ad exchanges and user interaction points for each ad.”

The company’s position on the front lines of mobile marketing allows them to proactively deliver the kind of creative their client’s need to convert their target audience. Russo explains, “Some of the hot trends we’re seeing right now with mobile advertising is activation, direct response, downloading of apps and a focus on what they’re trying to achieve”.

With a burgeoning presence in Columbus, a great place to connect with retails brands, and a growing client list, The Mobile Majority is well positioned to take advantage of the predicted exponential growth of mobile marketing and the consumer data that’s intrinsic to the space. Although Santa Monica is considered the company’s headquarters, the Columbus office is their marketing division and is on the short list of offices with job openings.

For more information on The Mobile Majority, please visit their website and sizzle reel: https://vimeo.com/mobilemajority