A building’s windows often reflect what a neighborhood is all about. Shattered glass, boarded up abandonment, windows cloudy with the dust of what might have been. Typical scenes like this play out in urban centers across the globe. But drive around any industrial midwest stronghold and it’s pervasive. 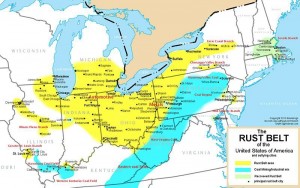 But if you grew up around the Great Lakes and you’ve lived other places, you might have the perspective to delve a layer deeper, to see past the myopic view someone from San Diego or New York might have of a place like Ohio or Michigan. Places considered “fly over country” by so many people who have never stopped long enough to really understand what the Rust Belt is really all about.

The industrial midwest as a whole is still suffering from the loss of so many manufacturing jobs but its also begun to diversify and slowly and subtly, you can see signs of an awesome Rust Belt reinvention.  Google and Twitter have offices in Detroit for example. Chicago, always a shining light in the midwest, has a massive tech startup scene. Indianapolis is a thriving hub of innovation, although as many from the area have said, they’re modest about it. Onosys, an upstart out of Cleveland was bought by Living Social. ShareThis has offices in Palo Alto, New York and Cincinnati.

Each metro area in the upper midwest seems to have everything from active angel investor groups to incubators, coworking spaces and an engaged, albeit small startup scene. Even smaller midwest cities like Toledo, Grand Rapids and Flint Michigan have their share of a burgeoning creative class and emerging tech upstarts. Many of the universities in the region have helped to foster and fund many of these efforts. But there still is a “brain drain” of epic proportions that these efforts have collectively failed to stop.

Brandon Cohen, an economic development consultant and professor of Business at the University of Toledo explains that its often a cultural mentality about success that drives this midwestern diaspora.  “In reinventing the Rust Belt, we have to access our belief system about entrepreneurship. The risk profile for these business opportunities is significantly higher and there is a lot of business failure. Failure to me equals experience, and it may take that failure for an entrepreneur to truly learn and then be successful. Unfortunately, in this region as opposed to San Francisco or Boston, we far too often consider failure simply as failure.  And that specific mindset, along with human and capital flight, is what drives entrepreneurs elsewhere.”

However students like Carly Keyes, an undergraduate student at The University of Michigan and a Detroit native says her experience of coming back to Michigan after moving out east was a good fit. “I’ve lived in Michigan for the majority of my life, and I have a lot of pride about it. The midwest, especially Michigan, has really shaped my identity and personality. Here, we are resilient. I started off my college career at UPenn in Philadelphia. When I got there, people commented on my accent and associated me with corn fields and broken businesses. Just goes to show you how little other regions know about other regions. Transferring to the University of Michigan was the best decision of my life because it reintroduced me to myself. For those of us who don’t jump ship, we accept what’s thrown our way and do something about it. Even though we have problems here, so does everyone else; I think we’re just open about them. It’s only when we embrace that awareness can we actually look to solutions.”

Cities like Detroit, long considered even the worst of the Rust Belt have some amazing stories to tell about their revival from the brink of veritable extinction. Alex Southern of GrowDetroit illustrates why he thinks Detroit is a city of opportunity. “It is so exciting to see our city’s engineering talent put to good use in new and exciting ways.Techshop in Dearborn, and makerspaces likei3 Detroit create an exciting dynamic in Detroit specifically, as they bridge traditional manufacturing with a high-tech touch — the intersection of hardware and software. A prime example of Next-Gen technologies can be seen at theDetroit Aircraft Corporation — a company worth taking note of. We need to address the problem of the sheer geographic size of Detroit. Boston, Manhattan, and SF can all fit inside the boundary lines of Detroit. Jordan Skole, a local Social Entrepreneur brought this to my attention recently, and it’s a staggering statistic when you look at a map and recognize this fact. That’s why I’m intrigued by the Detroit groups that are trying to convert vacant land to green-space, It creates a tremendous opportunity for someone who has the vision and means to execute.”

There are also great things happening in Indianapolis, which is home to several successful tech companies and a thriving startup scene. Denver Hutt, Executive Director of Indianapolis based coworking space Speak Easy says “Entrepreneurs experience the most growth in environments that provide access to both resources and support. In cities like Indianapolis – and throughout the Rust Belt – our startup ecosystem encourages overlap between entrepreneurial talent, mentorship at all levels and capital. These resources, partnered with Hoosier work ethic, a tradition of strong communities and affordability are the cornerstone of Indiana startup experience.

Indiana has a tradition of starting and growing companies that move the country, heal the country, feed the country; we create companies that matter. As Hoosiers, our entrepreneurial endeavors in technology are marked by the same core values of collaboration and community. With the successes of companies such as ExactTarget, Angie’s List, and Aprimo, our strides in marketing technologies demonstrate our ability to apply our Hoosier work ethic to the emerging technology landscape.”

These microcosms are small but relevant examples of the renaissance of the upper midwest. And while we may not have great weather year round or mountains and beaches, we do have great colleges, an inexpensive cost of living and a local ecosystem typically willing to go the extra mile towards staving off relocation by supporting young, local and innovative entrepreneurs.

That is why we’re in the process of creating Silicon Rust Belt  -a single news source to highlight stories of technology and cultural innovation in the industrial midwest, more specifically Illinois, Indiana, Michigan and Ohio. Our plan is to provide a consistent flow of content covering companies in the region, events, incubators, investment, resources and associated news. There is not a single source covering tech startups in this four state region and there is not a lot of synergy between the communities either.  Even though a lot of these cities like Cleveland and Dayton have a small scene, they just aren’t talking necessarily and we think they need to be and hopefully we can help with that effort.  We want to have a front seat for the Rust Belt revival and see the broken windows made whole again.

If you have a tech startup or culturally innovative project in the upper midwest, we want to know you. Please send an email to siliconrustbelt@gmail.com and follow us on Twitter @siliconrustbelt