Techstars recently hosted the third annual Techstars Startup Week Detroit. The event brings in visitors and entrepreneurs from all across Metro Detroit—including a number of local startups—to a gathering for businesses to connect with each other and to get their name out there. 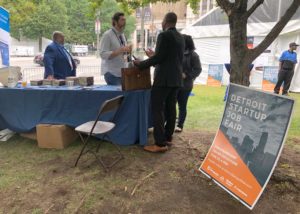 During the week, startups in the area have the opportunity to show off what their business is all about. The celebration offers local entrepreneurs learning opportunities, business presentations, a platform for networking and access to investors. This year, attendees also had a chance to visit the job fair, get free head shots and receive business tips from keynote speaker Marcus Lemonis of CNBC’s “The Profit.” The five-day volunteer-based event was held outside at Grand Circus Park in Detroit. 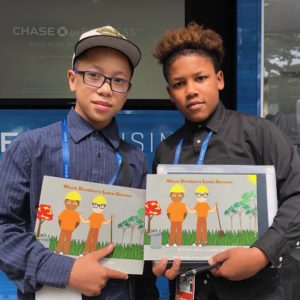 New startup Apply It was one of the businesses in attendance this year. 12-year-old Undra Mack and 11-year-old Austin Mack founded the business, and have already reached great success garnering a growing interest in their apps. One of the apps that these youngsters were promoting allows witnesses who are videotaping a crime to call the police while continuing to record the actions of the crime. The app is called C-Call.

Undra created another app that was similar to a “Would You Rather” game for kids. Undra said it already has 1,000 downloads and looks. Austin also made an app where people can see what particular glasses will look like on them before they make a purchase. They’ve already become pros at pitching their business efforts.

“We started it about two years ago, and we’ve just been trying to work hard and inspire other kids to try and work like us,” Undra said.

The two entrepreneurs also have their own lawn mowing business. They were selling their books, Mack Brother’s Lawn Service, at the event for $20 a piece. The book was written in hopes that it would inspire other kids to start making money at a young age. 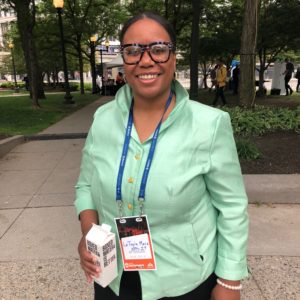 The kids are currently looking for more investors for their company. Their current investor, mother and teacher is LaToyia Mack.

“Obviously, being their mom, I had some initial interest in their ideas, so I allowed them to earn some seed money as well as matching their seed money,” LaToyia said.

Apply It was among numerous other emerging businesses at Techstars Startup Week Detroit this year. This year’s event had about 700 volunteers, and Chase for Business was the title sponsor for the third year in a row. Techstars works to find companies with similar missions for Detroit entrepreneurship to form partnerships with rather than typical sponsorships. Thanks to the partnership and support from Chase, the events are free and open to the pubic.

Quicken Loans was among the handful of other Startup Week sponsors. Lauren Hoffman is the Venture Community Liaison of Rock Ventures, which is part of the Quicken Loans family of companies that has formed a partnership with Startup Week Detroit. The company has been  a sponsor for Startup Week for the past several years.

One of their main goals is supporting entrepreneurs in Detroit.

Hoffman said that she loves getting people together in Detroit to show off the businesses that are growing here and to demonstrate that Detroit is a great place to start a company as well as make connections. She expressed her excitement about the job fair because of the many Detroit jobs that attendees can be exposed to. She noted that another plus about the partnership with Startup Week Detroit is gaining exposure for their own company. 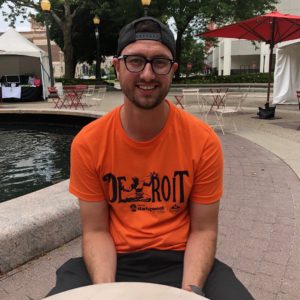 Co Event Lead Kyle Bazzy explained that Techstars is a global organization, and that there are hundreds of startup week events around the world.

“They are very big into ecosystem building, so they help provide the resources and they brokered the partnership with Chase. Then they bring it to cities like Detroit,” Bazzy said. “Then they tap into people like myself to help with the program.”

This year, there were about 11 to 12 thousand participants in the event compared to 7,000 last year. The number of startups involved has grown tremendously since the very first year.

“In year one, I could almost name all of them,” Bazzy said. “This year I have no idea.”

Bazzy said that part of what makes Startup Week Detroit different from the gathering in other cities is its diverse culture. Techstars made the choice to invest time in Detroit neighborhoods and the kids especially because the students may not able to afford as many opportunities. Code {D}etroit allowed 5,000 Detroit students exposure to coding basics during Startup Week through volunteer-based instruction.

Bazzy said that his favorite programs are the seminars and workshops that serve this community, and that you can find your tribe here. He just learned the story of the Mack brothers’ startup on Tuesday.

“As they were talking to somebody else, our volunteers were pulling other people aside and pointing them out saying ‘that’s why I do this,’” Bazzy said. “These kids know that there’s this community here that wants to pour into them; I think that’s one of the most powerful things that happens throughout the week.”