Seed stage digital startup accelerators have grown significantly in the last few years for all the right reasons and in terms of numbers, funding and companies incubated and graduated. Many of these ventures move on to become significant businesses and most founders contribute some aspect of their success to the leg up from being a part of blue chip programs like YCombinator, AngelPad or any of the Global Accelerator Network incubators.

While many of these programs are based globally and concentrated on the east and west coast of the U.S., the upper midwest has three significant incubators that rival their coastal counterparts. Cincinnati based The Brandery, Columbus based 10-xelerator and one of the most significant accelerators in the world, Excelerate Labs of Chicago which recently re-branded to become TechStars Chicago. 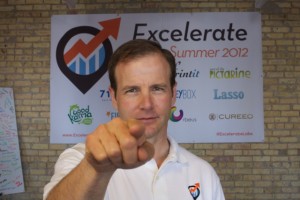 CEO and Co-Founder Troy Henikoff (founder SurePayroll) has been involved with the program from the beginning and explains what the program is all about, “TechStars Chicago is a 90 day accelerator boot camp for startups seeking seed capital, pro bono legal but most importantly mentorship. There are 135 mentors that are involved and help out with one on one meetings. These mentors fall into 2 buckets, active early stage investors that can give guidance and investment and successful entrepreneurs from companies like Groupon and OkCupid. It all leads up to Demo Day at the House of Blues where companies showcase their businesses to investors.”

TechStars Chicago joins the Boston, Seattle, NYC, Boulder, and London TechStars affiliates.  Excelerate Labs already had an incredible startup accelerator that was ranked the 3rd best in the nation.  There have been three classes (a total of 30 companies) to go through the Excelerate Labs program.  As of January those companies have raised over $30 million in outside capital.  With the marriage of these two companies the network of investors, mentors, and applicants for the Chicago accelerator have grown significantly.

“We transitioned from Excelerate Labs to TechStars Chicago. We ranked number three. TechStars, YCombinator then us. We actually modeled Excelerate Labs after TechStars Boulder. So Brad Feld [founder of TechStars Boulder] and I were having lunch and he said he’d rather partner than try to do what we’re already doing, and for us it meant increased visibility. Over time it meant more applications, better companies, and increased access. If we need someone from Facebook, Twitter, Google etc. we can get them. There were no negatives, it was all the little things that would allow us to put on a national platform.”

And if you applied to TechStars Chicago you are probably on pins and needles waiting for a reply.  Being a member of this exclusive program promises to get your startup out of the basement and into the conversations of all the right people. This summer will see its first class of companies go through the TechStars program and the inaugural class of TechStars Chicago will report for their life changing opportunity on May 28th and will graduate from the program on August 28th.  Hundreds of hungry entrepreneurs apply to the TechStars program each year but only ten companies are accepted. To be accepted into the program your idea must solve an interesting problem, must have a solution that will work, and you must be able to put together a great team of people.

Henikoff says the objective of the program is clear, “The goal is to be successful, going out and getting customers. In the last three years we’ve had 30 companies, over 30 million in funding and created over 150 jobs. The growth trajectory goes up every month.”

From an acceptance perspective, the focus is not geography but strength of the concept and founders. “We receive applications from all over the world and have accepted companies from Chicago, India, France, California and Texas, but we’ve had applications from all over. We’re agnostic to location, specs, race, religion. Interestingly 30% of our CEOs are women. And we’re not striving for it, it just happened that way.”

When companies arrive in Chicago on May 28th they will be given a detailed orientation from TechStars leadership outlining exactly what they can expect throughout the course of the summer. The entrepreneurs will have the opportunity to meet over one hundred mentors. These mentors are among the best digital entrepreneurs on the planet with the combined experience of over 600 startups founded.

Companies who are accepted into the program will be given $18 thousand in seed money; in return the companies give 6% common stock to the investors.  The entrepreneurs will also have an additional $100k in funding in the form of a convertible note. That money is invested into TechStars from over 75 venture capital firms that are committed to the success of these startups. Both of these perks are available immediately upon acceptance into the program. For the accepted, it is only the beginning of the amazing perks that are available. They will receive 10,000 Business ExtrAA points from American Airlines, $25,000 in Amazon Web Services hosting credit, $20,000 in Google hosting credit, and several other companies totaling $275,500 in goods and services.

From the time they arrive in Chicago they will be counting down the days until Demo Day. After a long summer of sleepless nights, countless meetings, and an incredible amount of perseverance; the entrepreneurs will be ready for the culminating event. Investors from around the world will descend upon Chicago hoping to back the next big thing in the technology space.  The ten companies will pitch their businesses to hundreds of investors who, combined, have billions in investment capital.  Once the presentations have been completed the entrepreneurs mingle with investors hoping to find people who believe in their idea.

The average funding per TechStars company is over $1.5 million.  In total over $300 million has been invested into the companies. TechStars has produced 199 companies with 139 of them being funded. 161 of those companies are currently active, 18 have been acquired by other companies, and only 20 have failed.  These companies have created over 1,300 jobs since the very first Boulder, CO class in 2007.

TechStars’ most successful company, SendGrid, has received more than $27 million in investment.  SendGrid is a cloud based email service that aims to improve customer communications. Other successful TechStars alumni include: Orbotix, Next Big Sound, and GrabCAD.

With a deep pool of applicants, mentors, and investors everybody is excited to see what companies will come out of the 2013 summer class. To watch what previous companies who have gone through the TechStars accelerator subscribe to their YouTube channel http://www.youtube.com/user/techstarstv.   Applications are being accepted for the London location until May 5th and the Seattle location until May 31st.  Click here to apply http://apply.techstars.com/#programs/ajax-application.

Silicon Rust Belt will continue to follow the progress of the TechStars Chicago class this summer and will report on Demo Day in August.