Chicago is Rallying Around the 1871 Community and So Should You

Our mission at Silicon Rust Belt is to amplify the technology and cultural innovation scene in the upper Midwest. This conversation cannot really get started without taking a good look at what the team behind Chicago based co-working space 1871 is doing with their organization because it’s not only technology or culture, its both. 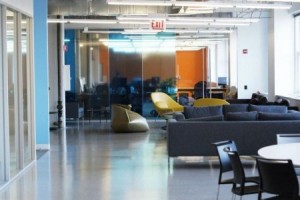 As their website states, “The story of the Great Chicago Fire of 1871 isn’t really about the fire. It’s about what happened next: A remarkable moment when the most brilliant engineers, architects and inventors came together to build a new city. Their innovations – born of passion and practical ingenuity – shaped not just Chicago, but the modern world.”

We had a conversation with Melissa Lederer, CMO for 1871, about all the moving parts that went into making the organization one of the most successful co-working spaces in the Midwest.

She explains that one of the key elements to 1871’s success is the months of planning and analysis that went into constructing an ideal coworking community. She says that the founders of the space also wanted to create a environment where early stage companies, investors, mentors and digital leaders could come together and discuss everything from funding to engineering to marketing and to learn from each other along the way.

“The goal was to design 1871 as a central address that would bring together all the players in Chicago’s entrepreneurial ecosystem to help early stage companies accelerate their path to success. But it wasn’t an overnight kind of build out. The plan was to take the best of co-working so there was a lot of research and questioning of the community, and it was months in the making. We learned that the content and programming really drive the success of the space too.”

There are a number of veteran entrepreneurs who have become active members and mentors of the 1871 community. Sam Yagan of OkCupid and Match.com is one of the central figures in 1871 and an advocate for the Chicago startup scene. “Sam was already a successful entrepreneur and wanted to move back to Chicago. He is from Chicago but it’s not the same community it was when he left. He is now the CEO of Match.com and their only employee in Chicago. [The company’s HQ is in Dallas.] To him, being in Chicago was important and he made it work.”

So many tech space leaders are Midwest transplants. Notable investor Marc Andreessen for example is from Iowa and went to school in Illinois. Jack Dorsey, co-founder of Twitter, is from St. Louis. Lederer explains that they want to send a clear message with 1871 that you don’t have to relocate to the coasts to have a successful company and that there are a lot of investors, support and resources available in Chicago and other parts of the Midwest as well.

She says something that distinguishes 1871 from other regional co-working spaces and is widely considered a huge draw for companies wanting to be a part of the community, is the level of talent from investors to advisors that members have access to.

“One of the things that sets us apart from a typical co-working space is that investors and VC’s have office space here as well. Investors need to put time and money into the ecosystem because sometimes just money is not enough. Our programming is central to the success of our startups. Its pretty unbelievable the amount of amazing volunteers we have here that are willing to spend time with early stage companies and help them achieve a path to success. It’s essentially free one-on-one mentorship. Our calendar is also full of workshops on a variety of relevant topics and we have amazing guest speakers – just a few weeks ago Microsoft’s Steve Ballmer was here and Google does a monthly talk.”

Right now 1871 is home to 235 companies and 500 plus entrepreneurs. However, over 900 companies have applied to get into the space so there is a selection process. All companies are digital startups as well.

In terms of 1871 success stories Lederer says “We believe our startups’ growth path is about 12-18 months. We’ve had a handful of graduations like Food Genius, which raised in the $1.5 million range. We put out an announcement recently that we’ve had $11.6m in investments in six of our companies. We have a few 7 to 10 person teams that are starting to outgrow 1871 but they haven’t wanted to move out because of the value. But we do have an Associate Membership that is a great fit for a larger company with another office that still wants to be part of the community here. It’s also a great fit for digital companies or investors that are outside of Chicago.”

Regional officials have also been a significant driver for the early success 1871 has received. Lederer explains, “The Governor and the State of Illinois and Mayor Emanuel and City of Chicago, have given us invaluable support. Almost one year in and the entire Chicago community – both the public and private sectors – are really rallying behind this effort.”