Cutting-Edge Facility at 1871 Will Bring Together Businesses, Mentors, and Investors to Foster Opportunity for Female Entrepreneurs

CHICAGO, IL (March 11, 2014) — 1871 announced today that it will launch 1871 FEMtech, an innovative incubator designed to facilitate opportunities and foster growth for women-owned technology startups in Chicago. The facility, which was announced with support from the Lefkofsky Family Foundation and Motorola Mobility, is a part of an International effort by Google for Entrepreneurs to launch 40 female-focused incubators around the world. 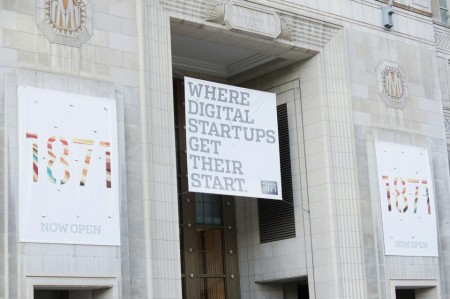 “Women-owned technology businesses have grown in number and reach in recent years, and we are hopeful to see more of these exciting companies doing great things as a result of our new incubator,” said Howard A. Tullman, CEO of 1871. “What we have found at 1871 is that if we embrace specific verticals and natural areas of growth, we can help our companies achieve much more than they might have on their own. Critical mass creates an environment of support, shared experiences and cross-pollination that significantly accelerates the development of powerful ideas.”

1871 FEMtech will feature between ten and fifteen women-owned technology businesses, that will be co-located and engage in programming, mentorship, and training that’s specifically designed to maximize their resources and opportunities for success. The companies that make up the incubator will be drawn not just from 1871 and Chicago, but from around the United States and the world.

There is significant historical data that demonstrates that early-stage, women-owned technology businesses are materially more successful than male-directed firms. DowJones indicates that for startups with five or more females, 61% were successful and only 39% failed. Additionally, there is data that shows that by putting multiple businesses with similar characteristics in close proximity to one another, there are demonstrable synergies and mutual benefits are created.

“1871 has had a far-reaching impact on our state’s economy and I appreciate their commitment to support women-owned startups,” said Governor Pat Quinn. “Female entrepreneurs are a vital part of job creation in Illinois and by helping them, 1871 will improve its already impressive economic performance.”

Innovation in Illinois is a top priority of Governor Quinn. The Governor was an early supporter of 1871, providing $2.3 million in seed money to get it started in 2012. Continuing on that success, earlier this year the Governor announced MATTER – an innovative startup center for next-generation healthcare technology companies. In addition, in 2011 Governor Quinn created the Illinois Innovation Council to identify and advance strategies that accelerate innovation, economic growth and job creation.

“Chicago’s tech and digital manufacturing industry continues to create jobs and boost economic growth across the City,” said Mayor Emanuel. “The FEMtech incubator at 1871 will increase opportunities in this dynamic sector for women-owned tech businesses and startups. This incubator, along with the City’s Technology Industry Diversity Council, will help ensure the diversity and vitality of the City itself as we continue to solidify our position as a leader in technological innovation.”

1871 FEMtech is part of Google for Entrepreneurs’ #40Forward initiative, a challenge to increase the participation of women in technology by 25% this year in an overall effort to close the gender gap. Google for Entrepreneurs is providing program assistance and $1,000,000 to partner organizations that increase the representation of female entrepreneurs in their startup communities because Google cares about diversity – not just because it is the right thing to do, but because it’s the smart thing to do.

The Lefkofsky Family Foundation has supported the launch of the incubator with a grant that will be used to ensure that the programming, operations and mentorship associated with the center are of top quality. Additionally, Liz Lefkofsky, executive director of the Lefkofsky Family Foundation, will serve as part of an advisory board for the incubator, which will include leading women in business from across the Midwest.

“There is great talent among women in technology in the Midwest, and it’s just waiting for the right support and mentorship,” said Lefkofsky. “We’re thrilled to support 1871 in providing these businesses with the resources, expertise and access they need to succeed.”

“Making sure that more female entrepreneurs have access to the tools they need to succeed can unlock tremendous potential in the technology industry and beyond,” said Courtney VanLonkhuyzen, Executive Director of the Motorola Mobility Foundation. “Helping to catalyze that kind of change is exactly what the Motorola Mobility Foundation strives to do in all its investments. That’s why we’ve been longtime supporters of 1871, and why we’re so excited to help launch 1871 FEMtech.”

In a recent survey, 1871 reported that nearly 30% of its member companies had a female on their founding team, contrasted by a recent report by Women 2.0 that indicates female-owned startups are only around 5%. The 1871 FEMtech incubator will work to extend the proportion of women-owned businesses not only at 1871, but also in and around Chicago and greater Illinois.