This year’s SXSW Interactive Festival in Austin, TX was a dynamic celebration of technology, innovation and the convergence of content and digital.

This was our 4th visit to the annual event, and each year it becomes increasingly more corporate, but that doesn’t necessarily mean that’s a negative, it’s just a slightly different vibe than in years past.

This year’s Michigan House featured a mix of brands, startups, accelerators and investors. The vibe was energetic at Michigan House and it seemed to be gathering a growing audience, outside of just regional people that happened to be in Austin for the event.

Lumos, the world’s first smart bicycle helmet with integrated lights, and a Techstars Detroit alumni, won this year’s “SXSW Release It” pitch competition on Friday, March 8. The live competition is for startups to launch innovative products to a panel of judges who decide on the winner.

It was spectacular to see the growing presence of Michigan based organizations, along with other upper Midwest groups like the City of Chicago, that hosted a session called Chicago: A Synergy of Local and Global Investing, featuring Kurt Summers, Treasurer of the the City of Chicago.

Presidential candidate and Mayor of South Bend Indiana, Pete Buttigieg was a part of the CNN town hall at SXSW. His message of youthful perspective resonated with the international crowd, many of whom are very interested in American politics.

One of the biggest speaker draws of the entire festival was Alexandria Ocasio-Cortez. The crowds lined up hours in advance to hear her interview. Her talking points about work ethic and perspective on corporate control over the government were applauded by the International audience. 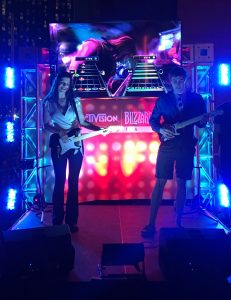 Some standouts included the Activision Experience, part of the SXSW Gaming festival, an awesome space takeover that included multiple floors of old school and video games.

The Dell Experience is always a must see and their Women Funding Women speaker session featured inspiring talks and great networking.

The Daily Show’s Presidential Twitter Library was a hilarious representation of all that is wrong with the current state of politics. Twitter of course launched at SXSW many years ago, and the Daily Show’s take on the bastardization of their platform was both a tragic showcase of the demise of the nation’s highest office and at the same time a snarky and poignant defense of the first amendment and the right to free speech. 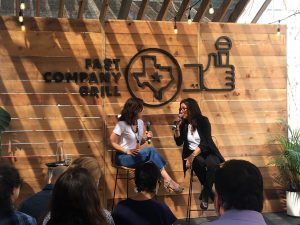 The SXSW 2019 Fast Company Experience, #FCGrill was a delightful convergence of food, entertainment, fashion, technology and innovation. It was well done – and artfully designed to appear as if the media outlet’s content had come to life in a nicely laid out indoor/outdoor venue that featured drinks, snacks, speakers and interactive experiences.

SXSW is different every year, and if you have never attended, we recommend it. This year’s event can be summed up by saying that the crowds were well versed on how to get the most out of the annual event. There is so much to see, it’s hard to make decisions.

From the main events, the parties and the popups, it seemed as if there were not as many newbies this year.

We talked with many repeat attendees who intended to experience the best the festival has to offer, which is essentially making connections to people, content and insight that you otherwise would not have had the opportunity to experience first hand. Put your phones down and get to Austin next March!